Are you an artist, performer, or creative pro that is unsure how to promote your self?

Want to build your audience?

On November 14, 2012 I will be presenting a workshop for artists and performers  about the tools  for self promotion using internet marketing.  The INTERNET MARKETING for ARTISTS  will be held at Test of Time Photography studio in Nashua, NH at 7 pm and it is open to all creative artists.

As a commercial photographer and photography educator I bridge the two worlds of commerce and creativity in the everyday operation of my business.  In this workshop I will show all the internet marketing tools I use to promote my  services and workshops.  This workshop will feature my real-world experiences using the powerful marketing tools that are available for building audience.

How Internet Marketing has Built my Creative Enterprise

In October of  2009 I decided to offer digital photography classes for adults at my new studio location.  As I developed my program of classes I expanded my use of internet marketing to promote these events.  Since that time I have had over 1400 people attend one of my workshops and photographer tours.  This growth in my photography business is directly attributed to  online promotions.  In this workshop I will share my experience and will guide artists through the process ob building an online reputation.

For complete details and registration for this event CLICK HERE

Big crowd turns out for the President in Nashua, NH

Yesterday our President came to town!

President Obama dropped in on the citizens of Nashua, NH on Saturday (Oct. 27, 2012) as part of the last leg of his re-election campaign. In my opinion, having the leader of the free world stopping into town is a big deal and for me a chance to capture a little history with my camera. 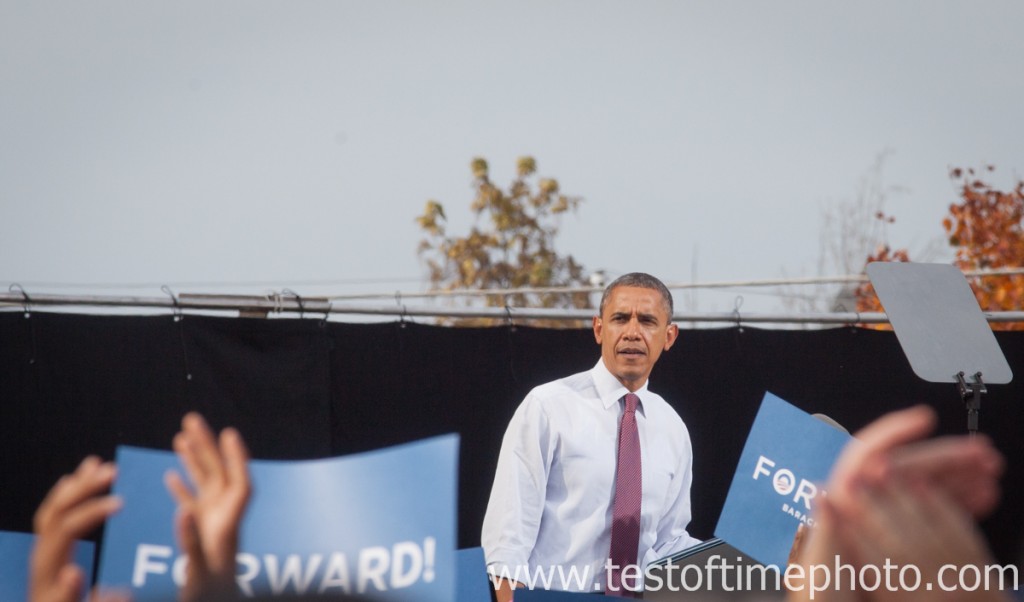 The folks in Nashua really turned out and despite long lines and many hours of waiting, they kept the smiles on their faces.  The fact that so many people decided to take part makes me hopeful about the state of our body politic.  It was a small demonstration against apathy, and I will take it as a positive sign. 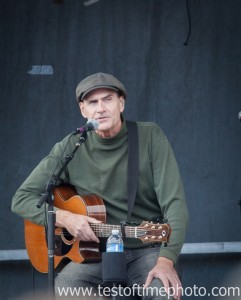 James Taylor provided a warm-up act for the main show and he did not disappoint.  He played a  selection of his hits and really sounded great.  It was a nice distraction and provided some relive for the thousands of folks patiently standing en-mass on the lawn of the Elm Street School campus.

I was able to share this experience in the company of two of my sisters, which is rare get together for us, which made for a more important occasion.  The event brought to mind, all the political /campaign events we have witnessed together in New Hampshire over the last forty  or so years.   From the days of Nixon to today we have had a front row seat to the American political process. 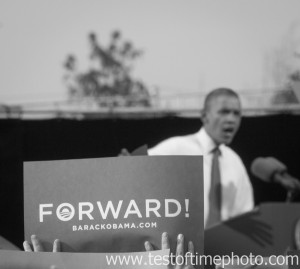 Game on in New Hampshire!  Now that the Iowa caucus is over John Huntsman will not be the only primary candidate wandering the streets on New Hampshire  seeking primary voters.    This shot  made on Monday when all the excitement was in the Midwest, the calm before the storm.  Looking forward to a week full of political events and sightings.

Gov. Huntsman with wife in tow,  passing in front of a bust of JFK  which graces the  Main Street in front of the city hall in Nashua, NH.   The statue commemorates the spot that  Kennedy started his campaign for president in 1960.  The image reeks of irony for me and I can not but hear the voice of Lloyd Benson comment on VP Dan Quayle ” You’re no Jack Kennedy…”

The presidential primary,  the national sport of the Granite State  is truly  one of my favorite things.  Only six more days until the parade leaves town!